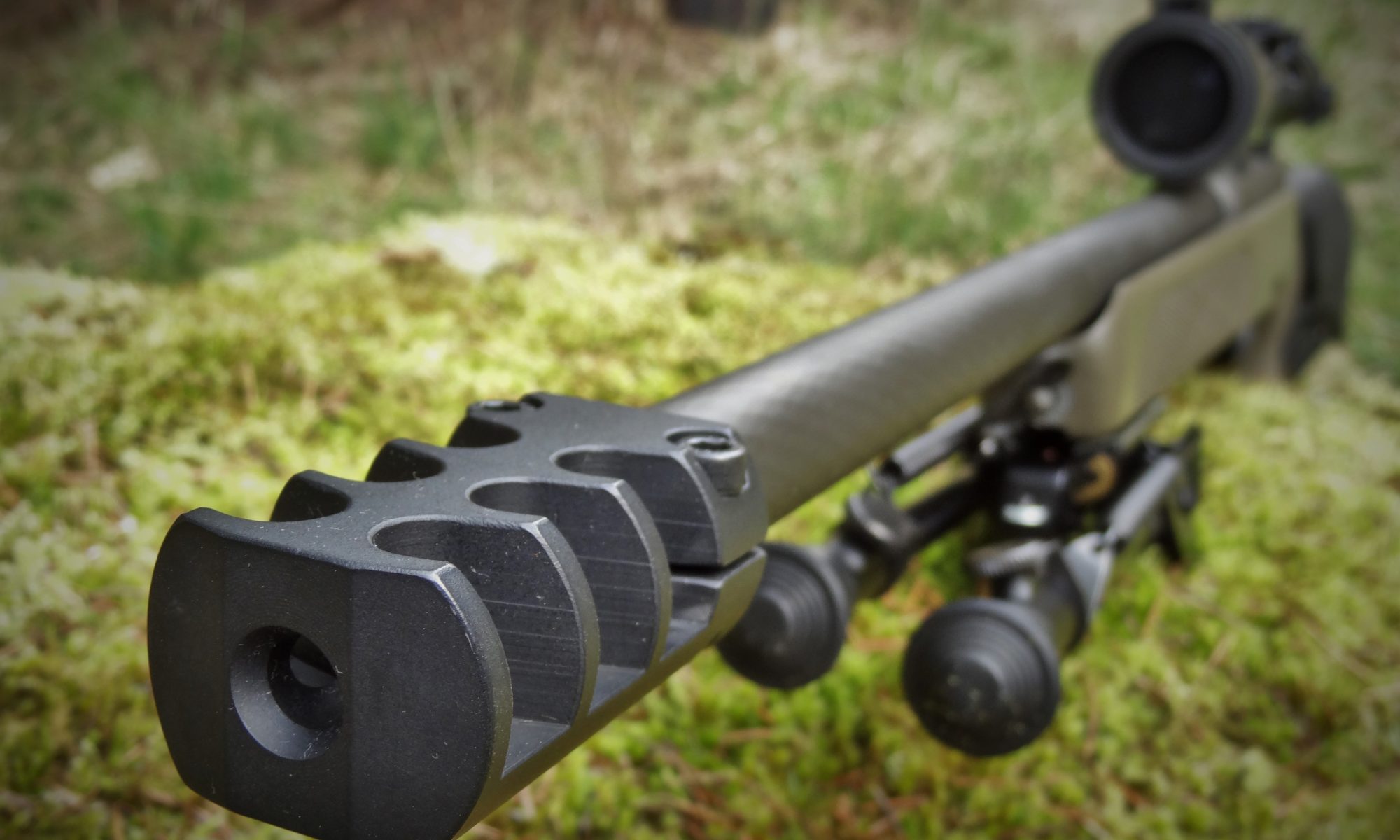 When I decided to turn my HK SL8-6 into a “designated marksman/sniper” configuration, I knew I wanted a good muzzle brake so I could “call my own shots,” so to speak. I also wanted to tame the recoil of my Steyr SSG-69. So I did some research and determined that a Grizzly Gunworks Defcon-1 brake would meet my needs, called owner Jeff Cox and placed an order. As he and I talked, I mentioned that I had recently purchased a Beretta CX4 Storm, and he convinced me to get a brake for it as well. Easy sell . . .

As TTAG readers may know, I love discovering and buying products made by small “mom-and pop” shops. My latest find, Grizzly Gunworks, Ltd., is the vision of Jeff Cox, a 39-year old married father of twin five year old girls. His small shop is based out of Hamilton, Ontario, which is about an hour south west of Toronto. The name “grizzly” comes from Jeff’s 15 year old German Sheppard, who is the shop mascot.

Jeff’s a competition shooter, and has won the Ontario Rifle Association’s (ORA) Precision Rifle Matches in 2009, 2010, and 2011. He designs his custom muzzle brakes and accessories with competition and combat in mind, focusing on precision, quality, and performance.

Jeff became a certified tool and die maker in 1994, and got his start designing, building, and installing robotics and automation equipment in the “big 3” car plants in north America from 1994 to 2004.  He moved up a management position in his company in 2004. But his real loves, machining and guns, never left him.

To scratch his machining itch, Jeff started Grizzly Gunworks in 2008 – mostly as a hobby. At that time, he was mainly building competition rifles. By 2010, however, the demand for his muzzle brakes and scope rings began to outweigh his capacity for output, especially since he still had a “day job.” So he did what so many of us wish we could do and quit the day job. Grizzly Gunworks LTD was born. Since that time, Grizzly Gunworks has been outfitting police organizations across the USA and Canada with custom-fit muzzle brakes and scope rings. Grizzly caters to many military, SWAT, private security and civilian customers. In fact, Grizzly Gunworks is growing so much that Jeff will be moving into a new facility in 2015.

If you need a muzzle brake, one of the first choices you will need to make is which style to get. Jeff makes five different styles of brakes for rifles and shotguns, each serving a slightly different function. I chose two, the Defcon-1 and the Ghost Protocol. More info on the other three can be found on his website.

The second choice whether you want a threaded or clamp-on brake (Threaded version of Defcon-1 shown at top left; clamp-on version at top right). Based on my internet research, it seems that many shooters have had bad luck with clamp-on brakes: the ‘net abounds with stories of them sailing downrange unexpectedly.  However, Grizzly Gunwork’s muzzle brakes are a step or two above the average. In large part, this is due to the fact that Jeff will custom fit the diameter of your brake to match your barrel’s exact size. A snug fit means less opportunity for the brake to shoot itself off.

The third choice you will need to make is materials: your three basic choices are 416 stainless steel, high carbon steel, or 7075 aircraft aluminum. The aluminum brakes are less than 1/3 the weight of the steel brakes, but are less durable over the long haul. In my case, the choices were rather obvious.

For the two precision rifles, I opted for the Defcon-1 brake in high carbon steel.  I choose the Defcon -1 both on account of its unique looks and high recoil reduction characteristics. The Defcon 1 is an impressive brake, both in terms of size and in performance. This brake is similar to a German-made brake I had been looking into.  In fact, I was originally planning on getting the German brake, but unlike Jeff, they apparently don’t answer their email.  Oh well.  Sucks for them.

The two steel versions come in right in around 9-10 ounces, depending on if you get the threaded version or the clamp-on. The clamp-on is a bit heavier because it is longer; this room is needed to accommodate a second set of 5mm allen screws to hold it in place (see two photos above). For the Steyr, I went with a 5/8 x 24 threaded brake. For the more diminutive HK SL8-6, I opted for a clamp-on brake.

One feature that makes the Defcon-1 unique is that it vents all of the gas up and to the sides on the brake.  None of the gas is directed downward, leaving on the gas that makes it out the front to potentially kick up dirt and dust. As a result, very little gas get directed downward.  I’m pretty sure that this feature will significantly reduce the dust signature of the round. I say “pretty sure” because I haven’t actually found any dust in which to test out my theory just yet. Truth be told, dust will be pretty much non-existent in Northwestern Oregon until around mid-July or so. I will update this review at that time. Having said that, I have been able to observe the gas by watching my buddies shoot the Steyr SSG under lights at night – at the 100 yard GP range at TCGC.  The gases vent roughly 8-10 feet in either direction, but do not seem to go beneath the barrel at all.

One side effect of allowing gas to vent upwards but not downwards is that the brake has a definite tendency to pull your barrel down after a shot is fired. This is particularly noticeable of you are shooting offhand with the .223 brake. In fact, the effect is so pronounced on the .223 brake that I think this brake is not well-suited for off-hand shooting. On the other hand, this brake is ideal for using with a bipod. In fact, shooting the HK-SL8-6 at 600 yards, I could often see my own trace and call shot placement based on near misses. I haven’t had a chance to air out the Steyr at longer ranges, but I suspect the effect will be similar.

But muzzle brakes are often a series of compromises. One side effect  of the side-venting gases (no pun intended) is that it makes this brake an unpleasant neighbor at the range. It also increases the sound heard by the shooter…by a considerable margin. Perhaps it should be called the “Deafcon-1.” Ha! But these are all signs that the brake is working at its intended purposes: reducing felt recoil and muzzle flip. And the Defcon-1 does these two things better than any brake I have ever used. To mitigate the noise, I’ve been opting to add a second set of foam ear-pro when shooting the Steyr.

For the Beretta CX4 Storm, I opted for the Ghost Protocol.  The Ghost Protocol is at the opposite end of the spectrum from the Defcon-1. Rather than being intended for precision rifles fired off of bipods, this brake is designed for shootin’ and scootin.’  It features seven sets of small concentric holes running parallel to the bore axis, as well as seven sets of larger holes running perpendicular to the bore axis.

I did not want to screw up the excellent ergonomics and balance of the Beretta, so I opted for a light-weight aluminum version of the GP. I was surprised at how big (fat) it really is; I have to admit I was expecting something 2/3 the diameter. That , however, would not leave room for the holes running parallel to the barrel.  But that’s Ok, I think it looks pretty cool, actually.

A 9mm carbine does not have a lot of recoil, but the Ghost Protocol took away what little of that there is, making double taps that much easier and increasing my split times considerably.

If you have a non-threaded barrel you are most likely going to opt for a clamp-on muzzle brake.  A clamp-on brake is the cheaper route to go, because it saves you the cost ($75 – $150) of getting your muzzle threaded. Now, if you do go the clamp-on route, it is imperative that you use calipers or a micrometer to measure the barrel diameter to 3 decimal places (for example, 0.856 inches).

Accurate measurements are essential! Jeff is going to ask you for two measurements: (A) the Muzzle Diameter, and (B) the Barrel Diameter one inch from the muzzle. See pic above. Jeff is going to cut your brake to the exact specifications you provide him. So, measure twice, so he only has to cut once.  I must have done it right because my brakes fit my barrels like a glove.

One final thing to keep in mind when ordering: Jeff custom finishes each muzzle brake to the customer’s specifications. For this time, you need to give him a couple of weeks lead time.  You won’t be disappointed.

Ratings (out of five stars):

Performance:  * * * * *
Lets face it, muzzle brakes aren’t rocket science; they represent simple Newtonian physics in operation. Nonetheless, Jeff has spend a lot of time on getting the diameter of the vents correct for different caliber riffles. So your .50 Beowolf brake will have different sized holes than a brake made for a .22-250. The performance he gets out of these brakes is impressive.

Durability:  ?
Again, time will tell. Jeff uses the best materials and no bushings, so I have no doubts as to the long term reliability of these brakes.

Cost: * * *
You can definitely find cheaper brakes on the market. But these are high-stress parts that can brake, er, I mean break…from stress and improper fit, so its best to spend a little extra and get something that is going to last you forever.